The Art of Listening – Veet Sandeh 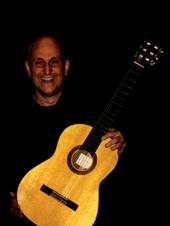 A very talented musician, flamenco guitarist, composer, artist and a very sensitive soul. He has an impressive body of work with CDs published like Travels in Sound and Silence, and Global Gypsies.

He was trained in western classical music and specifically guitar since he was twelve and gave his first performance at sixteen. As a child he was always thrilled by the orchestra with its ocean of sounds, and its capacity to completely engulf the listener. Music was always the big love of his life though it still is a mystery to him. For him music is meditation, his inner work, a profession as well as a way of communicating with the world. He feels there is an art in listening to music which can also be a way to get enlightened as you need to be receptive, attentive and have an empty mind without a constant flow of thoughts. He says that it is a rare quality now.

He has a beautiful story from Osho about Hariprasad Chaurasia, the maestro bamboo flute player. It seems that Hariji, even though he was a world famous musician, liked to come and play for Osho, as he really listened, and this was such a great difference from playing for the general public. People just don’t know how to listen, instead they do everything else – eating, talking, sleeping… As a listener you really have to learn how to listen. And in these times, he feels there is no respect or interest for live music.

As a teenager, he felt playing music would make him into a better person, until this was shattered by meeting some excellent musicians who turned out to be not such nice people. Realizing that there has to be a more holistic approach to his life with music, he began to look in all directions – philosophy, India, teachings… Finally he came across an Osho Meditation Center in his town of Frieberg, Germany and started doing meditations and groups. And then coming to Poona for the first time, he remembers sitting in the gardens of the Osho Meditation Resort playing his guitar for hours. He enjoyed this very much as he could play with no pressure which was a contrast to performing in concerts. He soon started to play in a band situation where he had to then start improvising. The turning point came when he did a group with Anuprada called ‘Gibberish to Music”. The group opened the floodgates for him and a lot of ideas and music started pouring out of him to the point where he could not sleep. It became an internal process and he learned a lot from this.

After spending half of his life playing guitar, he started learning the computer with all its intricacies for producing and mixing music. He describes it as going from one colour to playing with a kaleidoscope of many colours. Working in this medium has opened up a whole world for him musically. His hearing changed completely, his experience has taught him to sense quickly what element is working or disturbing in a mix. It’s like being in the place of a conductor with an overview of the whole process. Although it’s very demanding, it’s also an enriching experience at the same time. In electronic music as well he always uses some live element, whether it is flute or even just a voice because it then makes it sound natural. When you combine it with live acoustic music, it gives it soul. For him purely electronic music has no depth.

He has been working with DJ Ma Faiza the last couple of years producing music together. They met after she had heard the Global Gypsies CD which gave her the idea to organize what became a very successful tour of the band in Goa, India, in a combination of live music and DJ sets. Her dedication to music impresses him, and although they come from such different backgrounds and are very different personalities, he feels they complement each other beautifully. She comes from the viewpoint of a DJ knowing exactly what it is that literally moves people and what they respond to. He says he could have composed his whole life without anyone ever noticing, but she immediately plays what they create together in clubs in London and Ibiza. Working in this situation he feels he has done in one year what may have taken him ten. He now has a new album with Ma Faiza, also recently they did a remix for Omar Farouk … He presently lives in Jatzberg in Germany which friends playfully call Jazzberg.
He feels there are karmic problems with Germany and life is harder than it used to be, especially maintaining the standard of living. There seems to be a role-swap happening between East and West. The West was materialistic and the East was meditative, but it seems to be the opposite now. You can’t be in Poona these days without having a business meeting on the first day you arrive.