Meditation Is Your Awakening…

Meditation Is Your Awakening…

One-pointedness, concentration and meditation are not related to each other at all. This is one of the confusions prevalent all over the world.

But if the mind is a chaos, you cannot think rationally, you cannot think scientifically. To think rationally and scientifically, you have to be concentrated on the object of your study. Whatever the object is, the one thing necessary is that you are pouring your whole mental energy onto that object. Only with this much force is there a possibility to know the objective truth; hence, concentration is the method of all sciences.

But meditation is totally different. First, meditation is not of the mind. It is neither one-pointed mind nor many-pointed mind; it is simply not mind. Meditation is going beyond, beyond mind and its boundaries. They cannot be related; they are opposite to each other.

Concentration is mind and meditation is no-mind.

The West, particularly, has not known meditation. It has remained confined to concentration — hence all scientific progress, technology — but it has not known the inner science of silence, peace, of being a light unto oneself.

But this is a fundamental law of the inner reality that nothing is ever accomplished in the inner world by a reasonable man. It is an irrational, or better to say suprarational approach — to know oneself you don’t need mind, you need utter silence. Mind is always concerned with some thing or many things. There are thoughts and thoughts, ripples upon ripples — the lake of the mind is never ripple-less. 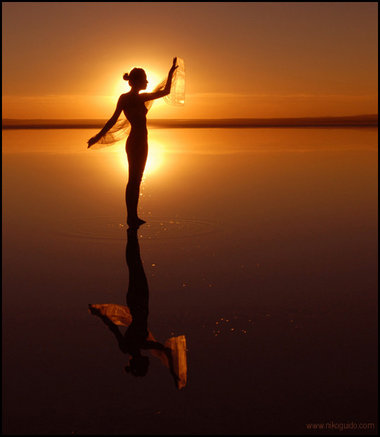 Some discomfort, some misery… you are not exactly aware what, but a constant feeling that something essential is missing; that you have everything and yet something which can make everything meaningful is absent. Your palace is full of all the treasures of the world but you are empty. Your kingdom is big but you are absent. This is the situation of the modern man; hence, the constant feeling of meaninglessness, anxiety, anguish, angst.

Modern mind is the most troubled mind that has ever existed for the simple reason that man has come of age. A buffalo is not disturbed about the meaning of life — the grass is his meaning of life; more than that all is useless. The trees are not interested in the meaning of life; just a good shower and a rich soil and a beautiful sun and life is a tremendous joy. No tree is an atheist; no tree ever doubts. Except for man, doubt does not exist in existence. Except for man, nobody looks worried. Even donkeys are not worried. They look so relaxed, so philosophically at ease. They have no fear of death, no fear of the unknown, no concern for the tomorrow.

It is only man and his intelligence that has given him a very difficult life, a constant torture. You try to forget it in a thousand and one ways, but it goes on coming back again and again. And this will continue until your last breath unless you know something of meditation, unless you know how to turn inwards, how to have a look at your own interiority.

And suddenly, all meaninglessness disappears.

What is the point of a beautiful sunrise if you are asleep? What is the beauty of a rose if you are asleep? Mind is your sleep, concentrated or not. Meditation is your awakening. The moment you awake, sleep disappears and with it all the dreams, all the projections, all expectations, all desires. Suddenly you are in a state of desirelessness, non-ambition, unfathomable silence. And only in this silence, blossoms flower in your being. Only in this silence the lotuses open their petals.

Remember that any teacher who says to you that concentration is meditation is committing a great crime. Not knowing that he is misleading you, and misleading you on such a fundamental subject, he is far more dangerous than somebody who can kill you. He is killing you far more significantly and deeply. He is destroying your consciousness; he is destroying your very possibility to open the doors of all the mysteries that you are.

Albert Camus has one beautiful statement to remember: “The absurd is the essential concept and the first truth.” Naturally, when mind is not there, no-mind cannot be a rational concept. It is absurd. It cannot say anything reasonably — where it is, what it is, what it signifies. It can only indicate mystically — hence all the parables of the world. The mystics could not say in a logical way what they have experienced. They went around telling stories, parables, which can be understood on two levels: one of the mind and one of the no-mind.

That is the beauty of a parable. You can understand it just like any other story, but it was not meant to be just another story; it was meant to give you some hint, some hidden hint towards that for which mind is absolutely inadequate. I will give you a few examples.

A blind man is brought to Gautam Buddha. The blind man is not an ordinary man, he is a great logician. And his whole village is tired of his logic. They are very annoyed and irritated by the blind man, because he refuses to believe that light exists. And he requires of the whole village that if they say light exists, they have to give him proof: “I can touch things; let me touch your light. I can taste things; let me taste your light. I can smell things; at least let me smell your light. I can hear things; beat the light so I can hear the sound. Do something. These are the only four senses I have.”

Light is neither available to the nose nor to the ears; neither to the mouth, nor to the hands. Unless you have eyes, there is no way to prove that light exists.

Gautam Buddha said to the people, “You have brought him to a wrong man. You have all given all kinds of proofs, and you have not been successful. What can I do? Take him to my personal physician. He is just sitting behind me. He is the greatest physician of our time; perhaps he can cure the blind man’s eyes. He does not need any argument, he needs treatment. He does not need any evidence, logical proof about light; he simply needs eyes. Then there will not be any question or any doubt or any asking for evidence.”

He was given to the physician. It took six months for him to cure that man from his blindness. The day he saw light he cried and went from house to house in the village to offer an apology, “Forgive me. Although I was being rational and logical I had no idea that unless you have eyes, you cannot be given any proof that cannot be rejected by you, argued against.” Although the whole world knows that light exists, the whole world cannot make a single blind man convinced of it.

Your consciousness is not available to the mind. Your mind is not the right vehicle to know yourself. Unless you have a new eye — what in the East we have called the third eye, symbolically…. These two eyes open outwards. Just as a symbol, the third eye opens inwards. The two eyes are for the duality of the world, the one eye is for the singleness of your being.

As you start looking inwards, you are amazed: you were ignoring yourself, and that was the trouble. That was why you were in misery, anxiety, suffering. You were trying everything to remove the misery, but it was caused by your unawareness, by your unconsciousness, by your ignorance of your own being. That was the cause. And unless that cause is removed, you will never have a taste of blissfulness, of ecstasy, of immortality, of the divineness of existence.

Go beyond the mind — and the way beyond the mind is very simple — just become a watcher of the mind, because watching immediately separates you from the thing you watch. You are watching a movie; one thing is certain, you are not an actor in the movie. Watching the road and the crowd passing by, one thing is certain; you are standing by the side, you are not on the road in the crowd.

Whatever you watch, you are not.

The moment you start watching the mind, a tremendous experience happens — a recognition that you are not the mind. Just this small recognition that “I am not the mind” is the beginning of no-mind. You have transcended the crowd, the voices, the chaos of the mind; you have moved into the silences of the heart.

Here is your home, your eternal being.

Here is your deathless, essential existence.

Knowing this has never been transcended by anything more blissful, more ecstatic.

You may have heard about Segal’s Law: A man with one watch knows what time it is. A man with two watches is never sure.

Mind is not only two, it is many. A man with mind is not sure of anything. He is doubtful about everything; he is unsure about everything. And a life of doubt and unsureness is not a life; you don’t have any roots anywhere. And without roots you cannot have flowers, and you cannot become fruitful. Your life will remain barren, a desert where nothing grows…